Hold, Hold, Hold - Hymn to the Goddess Hulda of the Meißner

Hold, Hold, Hold - Hymn to the Goddess Hulda of the Meißner

An invocation to the Goddess of the holy mountain in German / Deutsch & English and how it was composed (Englisch only, German will follow). 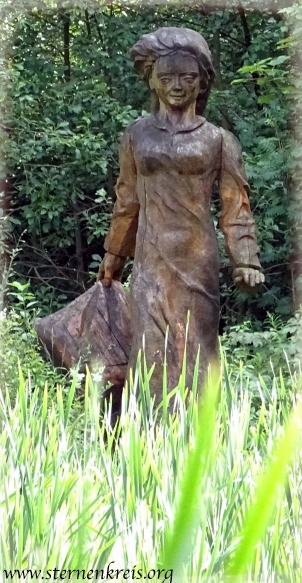 Statue of the Goddess Holle from the Holle Pound, Meißner.
Picture by Ella Adair

This prayer was originally created as part of a rite to the Goddess Holda, better known in Germany as “Frau Holle” (Mother Hulda). I live in relative proximity of the Meißner, one of two mountains she is supposed to live in according to folk lore. The rite was planned to be held on the Meißner itself, visiting beforehand some of her sacred places mentioned in the poem. My main information source for composing it was a book by Karl Kollmann “Frau Holle und das Meißnerland” (2012). Additionally, I visited the nearby museum called „Holleum“ devoted to her. I sorted the information by sacred sites as it made sense for the planned trip. As some of the sites are connected to different points within the agricultural year, I decided to arrange the structure of the invocation in this way. Afterwards it was a matter of putting it together and in verse form. The most challenging factor was to keep it rather short and stop myself from wanting to put in every bit of information I had collected on her.
„Hold“, is a form of her name (Kollmann 15), and I used it in the poem paralleling an old folk rhyme about Wodan beginning with „Wold, Wold, Wold“. I had already written an invocation for Samhain using “Hold” and “Wold” for Wodan and Holda as the leaders of the wild hunt. The beginning of this invocation is based on that poem, which I than enlarged into four verses. 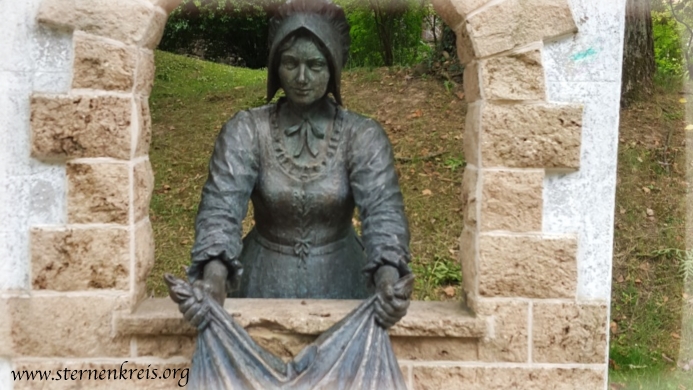 Mother Holle Statue in the parc of Hessisch Lichtenau by the Meißner.
Picture taken by Ella Adair

The first verse just presents prominent attributes of the Goddess, so everyone knows what she’s all about. The second verse mentions the Hohlstein, a cave with a small pond within where water quietly scooped on Easter morning is supposed to bring good health. In the third verse I used the legend that Holle is also the White lady and that she likes to sit on a special stool and comb her golden hair on a meadow that is called Morgengabe, “Morning gift”, which talks about the gift a newly wedded woman gets in the morning after the consummation of the wedding. It is connected to midsummer. In the fourth verse I used Martin Luther’s information of Holle as a vegetation demon dressed in straw (Kollmann 12) and that she is connected with the blessing of the farmland (Kollmann 19). The legend of her blessing the diligent is there as well.  Although, in the folk legends connected to midwinter and the 12 nights afterwards called “Rauhnächte” in German, in her most well-known fairytale story and in some other folk tales, it is as well generally mentioned (Früh 18, 69, 70, 73, 80, 81). For the last bit I used the Wild Hunt. It is said that she leads the souls to a place on the west side of her Mountain that is called Badestube (Bathing room). On the east side a small pond or lake can be found, where the children are said to come from. She has been said to bath there in the noon time.  So it is logical to connect them both with rebirth, Holle guiding the souls into the “Bathing room” and through the pond back to rebirth. Later on it was this idea that actually brought me to use this invocation as well for Samhain.  The last verse simply connects the beginning with the end, asking to strengthen the live of the performer.

Hinweis:
This hymn was later as well used as part of a Samhain rite and this article was published in Oak Leaves Autumn 2017 (together with the ritue module) issue. It is known, that has been used by an ADF Grove in the USA. If you used it for a rite, I woudl be thrilled to hear about it and hear about your experiences with it.