4. The Home Shrine
As we moved to our new house in spring I re-decorated my shrine completely on a new shelf, high enough for my son not to reach it, but low enough for Sunday service. 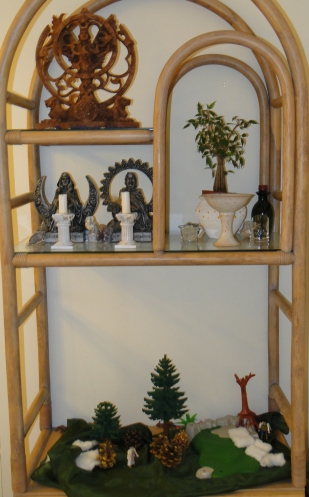 My Tree is a plant in Tree form, the Well a small bowl with a crystal in it and a candle for Fire. In front of the Tree the chalice serving as offering bowl. The rocks symbolizing the primal mountain on which the Tree grows. The bottle contains port wine for sacrifice. On the wall the star stands for Polaris.
I couldn’t do without the Goddess and the God statues. Though the God for me is Lugh, the Goddess I used to represent different Goddesses, until at the Oath rite she was claimed by Cerridwen, representing her now. On top is a statue of my patron Ishtar.
Underneath some Playmobil made safe for younger children, on the picture Modron looking for her son Mabon, which my son can already understand and imitate. So I he can play while I do Sunday mass.

I also have a small playmobil shrine in my son’s room with Tree, Well and Fire. Cernunnos (“Nenunos”) and Brighid.

For future improvements I would like to finish my reconstruction of the “Cult-Tree” of Manching and buy more suitable Playmobil figures. Another point is that the shrine looks a bit “sterile” (though easy to clean) it still needs to grow a bit more. Moreover I want to add a suitable oil burner.

Ishtar antwortete auf das Thema: #12423 10 Okt 2012 09:35
Shrines evolve so there are some differences now: I bought a small essential oil burner which is easily cleaned. It represents fire now and the "bowl" is used for oil offerings. The candleholder formerly representing fire has now become the representation of the well (I like the picture on it). The plant had to leave because it was not happy in that place. So right now the candle of my son with the tree of life on it represents the tree (but is not lit) until I either finish my replica of the Cult tree of manchig or find something else.
Mehr lesen...